What's the origin of road names?


An essential reference tool for genealogy and local history is a list of road and city name changes. You'll often find the list above the county or city atlases and on the walls of historical societies. There's also a book of post offices that includes a list of all decommissioned or merged post offices in the US. These lists help patrons locate streets that aren't there any more or were renamed as the city grew. These are often accompanied by lists of urban house numbering changes, particularly important when looking for houses and properties in the oldest parts of a town.

The names for these street and road  are often easy to explain. The city founders numbered the streets: first, second, third; or named them: main, high, broad. There are streets named for presidents and states, trees, and flowers. Sub-development streets are often named for geographical features, or variations on the name of the housing development.

But what about the roads you pass that have city names like the one in northeastern Ohio called "Cleveland-Massilon"? That's easy, it runs between Cleveland and the town of Massilon. Others are named for the farmers who owned the land along the road.

Of course, there's the National Road, with its many names, the Lincoln Highway, and the subject of the  article below, The Dixie Highway. Why are they named this way? What's the history behind the nomenclature.

Posted by Miriam Kahn at 5:07 PM No comments: Links to this post

Learning about the Past

Many of you know I trained as a classicist, studying ancient history and fleshing it out with Medieval and Renaissance periods through to the Early Modern Period (1500-1700s). And I'll admit I had absolutely no interest in history from about 500 (CE) to the present until about 30 years ago. All that changed when I moved to South Dakota in the mid-1980s and began to learn a little about the early settlers and their relations with the Indians. And I was curious about explorers and settlers who traveled through the land and interacted with the indigenous peoples.

This began a new interest, studying early American History. I found I was still interested in the older materials, the older times, but I began dabbling in more "modern" history.

When I began to do, and then teach, genealogy and local history, I realized I needed to know a lot more about early America and later America. Who came here? Where did they come from? What was the country like? I started with histories of Ohio, where I was living, delving into Allan Eckert's The Frontiersman and Conrad Richter's The Trees, The Fields, and The Town.  As I learned more about Ohio history, I learned more American History.

Because I missed my hometown and it was full of 400 years of history, I began to explore histories of New York, particularly Long Island, where I grew up. As I traveled to different cities and state, I purchased books about the towns, the states, and their settlement. I also purchased historical fiction because it's much more fun to read than academic history. I delved into murder mysteries set in various towns and cities I visited. What fun.

Suddenly, I realized I knew a lot of American History, much of it the political 'from the top' history and a little of the people "history from below."

Embarking on a PhD in Public History, I specialized in 19th century American History. To qualify for my degree, I read a huge swath of US History from 1776 through the early 1910s. This built my solid understanding of what makes America tick.

So why write about this at all? Well, to do genealogy and local history, you have to read and explore. You need to read about the time period, the records, the people, and the events. You cannot study your family, any family, or event, town, community, or even building and business without understanding what that time period was like, who ran the town, and what events, large and small, affected individuals there.

Go out, read, and explore the world around you. Make history come alive!
Posted by Miriam Kahn at 8:24 AM No comments: Links to this post

As you continue to search, think about the strengths and weaknesses of the various databases. Family Search is best for vital records, Fold3 for Military records, Ancestry is a mixture of census, newspapers, and more. As you work with the databases, you learn how to narrow searches. What's most difficult is to reproduce a search.

I'm most frustrated when I cannot figure out how the answers are displayed. They are rarely displayed in alphabetical order. Sometimes they don't provide the geographical or demographic clues you seek. Nevertheless, the online databases save lots of time driving up and down the highway and cut down on road trips.

As to Family Search, you'll find that Ancestry and FS have different missions even if they are both focused on LDS missions. Family Search is the best place to look for vital records, church records, and more. That's where they got their start and where their best indexing efforts are focused. From there, they have immigration records and other records. Ancestry is commercial and focuses on census records, newspapers, and other types of records. You need both, so try both when you search.
Posted by Miriam Kahn at 1:13 PM No comments: Links to this post

There are many ways to stay current as we study local history and genealogy. I peruse magazines, books, and listservs, with the last the easiest to follow.  Here's a list I put together of what comes to my e-mail box. What do you read?

Posted by Miriam Kahn at 10:21 AM No comments: Links to this post

Another year, another opportunity to explore Genealogy & Local History

It's been a year since I posted about Genealogy & Local History and my course on the topic starts Monday. I'm already thinking about exercises, readings, and research projects to share with my students and colleagues.

The course is always an opportunity for me to hone my skills, learn a new resource or two, and teach  another crop of students how to navigate primary and secondary sources, census records and public records, and government documents. It's a challenge and lots of fun.

To add to the mix this fall, I was approached by a church organization to help they figure out how to navigate an old, many-times-renovated building. I'll be asking my students to help me do background research as I explore the physical building. It's a great opportunity to work on a real project for a real client.

For the first week of class, we'll talk about why people do family research, the basic tools they use, and how they work. Then we'll dig deeper into those tools. With changes to each of the websites, I've rerecorded ALL my lectures for week 1 and am ready to go on Monday.

So why do people research their families and communities? Well, some don't know their grandparents' names and want to know all about them, where they came from, who they were aside from strangers in photographs. Others want to know more about the 'old country' whether it's on the Atlantic, Pacific, or Gulf Coast, or in Europe, South America, Asia, Africa, or along the Silk Route. What did they eat? What did they wear? Who were their children? Some want to connect to cousins far and wide.

For myself, I want to know more about my father's family. Both sides are somewhat of a mystery and I want to know the names of great grandparents, where they lived, and what they did for a living. I've discovered some surprises and uncovered some mysteries.

As we explore family history, we'll find that each person has members of their family who are considered 'black sheep' for some reason. We'll find cousins marrying cousins, and a bigmist or two along the way. These shouldn't be surprises. You might find a slave owner or slave in your past or an indentured servant who traveled to the New World and paid off the cost of the ship and food. Others' might find criminals who were sentenced in England to X years and transport (to the colonies in America or Australia).
Since America is populated by people from far and wide, from every race, ethnicity, and country across the globe, embrace the differences and cultures, and explore them along with me this fall.

As always, I promise to post to this blog regularly, so we'll see how well I stick to my goals.
Posted by Miriam Kahn at 7:57 AM No comments: Links to this post

The centenary of the Civil War triggered or encouraged a exploration and preservation of battle fields. Civil War Scholarship increased along with the study of primary sources and landscapes.

The Sesquicentennial  of the Civil War, which is just ending this year, was another turning point in the study of the war and the preservation of materials.


Posted by Miriam Kahn at 12:04 PM No comments: Links to this post

Pursuing Local History and Genealogy projects means exploring the past. Researchers examine records, journals, diaries, newspapers, and books to learn what happened in years gone by, to understand how people experienced events, and, most of all, how people lived. What better way to learn about the past than by studying photographs. After all, photographs freeze the past, freeze events so anyone can study a building, person, or event at that moment in time.

Sarah Weatherwax,  a photography curator at the Library Company of Philadelphia, writes about how early photography was received in 1839 Philadelphia. Her piece appears in the blog "O Say Can You See?" http://americanhistory.si.edu/blog of the National Museum of American History, part of the Smithsonian Museums. 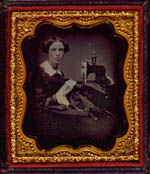 If you want to read more about Daguerreotypes, check out the Daguerreian Society  http://daguerre.org/resource/history/history.html  or look at more examples held by the Library of Congress http://lcweb2.loc.gov/ammem/awhhtml/awpnp6/daguertype.html

If you want to learn more about Early Photographic Processes, the Smithsonian is an excellent place to start. http://www.si.edu/mci/EarlyPhotography/about.html
Sarah Kate Gillespie speaks about early photography to the Smithsonian (2011) in 4 short lectures entitled: 'One Thing New Under the Sun: Morse, Draper, and the Cross-Currents of Early American Photography' http://www.si.edu/mci/EarlyPhotography/sarah_kate_gillespie.html

Take a look at the articles and watch the lectures, then explore photographs in your collection. How do they document the past? What other items in your archive, museum, or library show a past that is long gone or much modified?

One Thing New Under the Sun: Morse, Draper, and the Cross-Currents of Early American Photography

One Thing New Under the Sun: Morse, Draper, and the Cross-Currents of Early American Photography


Posted by Miriam Kahn at 7:58 AM No comments: Links to this post

Miriam Kahn
I am a library consultant interested in a variety of topics. Each blog goes with the core topic: books, genealogy, libraries, and more books. I write book reviews for a number of organizations. Look for more information about my work and services on my website http://www.mbkcons.com